Fernando Botero is a renowned Colombian painter and sculptor known for his volumetric stylization of figures and objects.

Fernando Botero is a renowned Colombian painter and sculptor known for his volumetric stylization of figures and objects. His oeuvre ranges in subject matter, including daily life in Colombia, art historical references like the Mona Lisa, and abuses of power—all unified by Botero’s exaggeratedly rotund figures. This stylization, known as "Boterismo", is often interpreted as a pointed social critique, as seen in his The Presidential Family (1967). “An artist is attracted to certain kinds of form without knowing why,” he reflected. “You adopt a position intuitively, only later do you attempt to rationalize or even justify it.” Born on April 19, 1932, in Medellín, Colombia, Botero grew up surrounded by Spanish colonial architecture as well as pre-Columbian artifacts. Initially schooled as a matador, the artist abandoned the profession after two years to pursue art. Travelling to Europe in the early 1950s, he copied works of Francisco de Goya and Diego Velázquez at the Prado Museum in Madrid and studied the paintings of Paolo Uccello and Piero della Francesca in Italy. In 1960, the artist moved to New York where he experimented with the gestural brushstrokes of the New York School painters of the time. This stylistic dalliance was short-lived and by the 1970s Botero had settled into the technique for which he is now known. The artist currently lives and works between Paris, France, New York, NY, and Tuscany, Italy. His works are presently held in the collections of The Museum of Modern Art in New York, the Art Institute of Chicago, and the Museo Botero in Bogotá which is dedicated to the artist and his oeuvre. 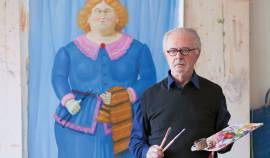 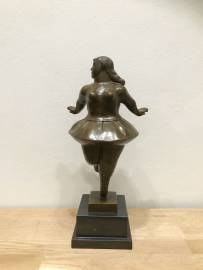