He studied in Prague with Engelmüller and in the courses of the School of Applied Arts in Vienna, in Vienna he also taught at Czech schools, a number of exhibitions, represented at the Viennese Sezessi held in 1928 in Košice, Bratislava and Prague.

In 1929 he had a group exhibition in Vienna (Toman, Chagall)

He worked as a teacher at a Czech school before World War II in Vienna. He was a member of the Association of Czech-Viennese Artists. He has exhibited in Vienna, Prague, Bratislava and Košice.

Oils marked by cubism and the search for color harmony come from this period. Around 1935, in the omen of World War II, he returned to his homeland, settled in Kunratice near Prague and began working there as a teacher and school principal. He continued to create paintings of the Central Bohemian landscape and after the war he set out on a bicycle to record traces of war in tempera (Austria, France, England, Poland).

Later, he often painted in the streets of Prague and captured the bustling life of the city and its changes. Throughout his artistic life, he devoted himself to painting still lifes and, above all, colorful bouquets, which he often painted until the complete decay of the flowers.

He has exhibited in Vienna, Prague, Berlin, Cologne and Moscow.

His works are in the National Gallery, in the regional galleries of the Czech Republic.

In 1980, he received the title "Zasloužilý umělec" from the state (Czechoslovakia). 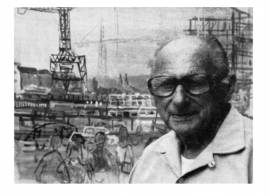