NOVÁK Ladislav 1925 Turnov - 1999 Třebíč He was a leading Czech representative of Surrealism. He was also excelled as a poet. In art expression, he is the author of a specific technique of so-called frosing.


Czech painter, designer, poet and translator, original and inventive creators of unusually rugged, playful and multifaceted creations. His artistic career began in the late 1950s with drawings of pastels followed by dripping attempts. With this technique, he first became acquainted with the book "Abstraction malerei", which he bought in Vienna. In an interview with Jiří Hloulou, he said: "" I was attracted to writing about Pollock, about his spontaneity. When I returned, I tried to shuffle the acetone paint into small pieces of cardboard. This was the result of miniature dripping. "" Deeper interest in contemporary art has led him to more contact with cousin J. Kotík, who introduced him to M. Medk and J. Kolář. In 1962-4, a period began to form in which he began to discover a number of methods and practices from which he drew in the years to come. The first technique is so-called compressed roses. The rose was plastic, and it was created by the gradual rupture of layered papers from books, magazines and newspapers. In the middle of the newly created flower is then a keyword or password. These roses were later disrupted by dripping or spraying. In 1963, the first topological drawings were created, based on automatic drawing, which was subject to one rule: The lines must not cross. This was the way to create complex structures that resemble animal or human contours. Topological drawings also applied in the landscape. He made great drawings on the snow (1969), three years later he organized an event called Rowing where he painted white lines on huge stones. During this period, his interest moved to work with found materials and their subsequent destruction and meaning reassessment. First he created mini-cages, in which women's eyes were carved and placed in other places. At other times, his eyes scrambled completely. Later he discovered a new technique called alchemy, whose main purpose is to distort and destroy the original printed image by chemical means. In 1964, he became acquainted with the technique of guts and attempted to search for other possibilities and forms. This was the technique of frosing. He first wrung the paper, spread it out again, and, in the resulting bends, he interpreted some random contours. He favored especially in the early seventies. Then they began to create cycles of alchemy, where the chemically disturbed surface of the image material was partly creased, and the resulting structure was transformed into a fantastic drawing that was based on reproduction. In 1989, during his stay in Verona, Italy, he created splatter drawings that he developed and combined with other techniques, so he created veronage. He had the first exhibitions in the 1960s, and his distinctive yet diverse work attracted interest also from theoreticians such as J. Chalupecký and F. Šmejkal. At the time of standardization Ladislav Novák was not allowed to publish or exhibit, and his work returned to the forefront of interest only after the Velvet Revolution. During his life, he has organized 45 individual exhibitions and has participated more than 60 group exhibitions both at home and abroad.
Author, see NEČVU 2/571, CH10 / 46. " 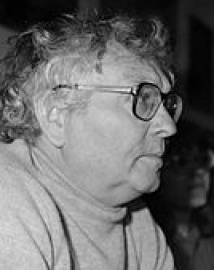 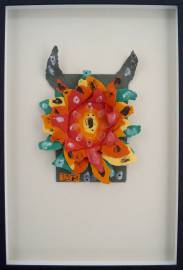 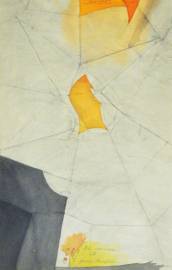