Study 1980–1985 Faculty of Education in Pilsen, Department of Art Education 1976–1980 study of drawing and painting with Jiří Zeman and ac. mal. Dana Puchnarová 1974–1978 České Budějovice Grammar School Roman Brichcín is one of the painters whose paintings are urgently imprinted on the memory since the first meeting; they are so intense and disturbing, yet impressive and shared. I realized this already at the exhibition Czech South 1990 in Aleš's South Bohemian Gallery, where the young painter presented three works. In 1991, his independent ensemble attracted attention in the "K" Gallery in České Budějovice, in 1992 an exhibition with the sculptor Michal Škoda in the U Řečických Youth Gallery. But it was only necessary to have a personal meeting with Roman Brichcín in 1992 in his studio in two rooms of the farm in Hrdějovice (where examples of old rural architecture have been preserved on the northern edge of the town). The spaces where he painted and composed paintings were far from enough for him; when we wanted to look at his vast oils, he carried them out to the vast courtyard and leaned against the long whitewashed walls. I reminded myself: this is how E. Munch somehow treated his works in a house high above the city of Oslo: from spring to winter he built them in an open courtyard, against wooden walls with a narrow roof trim, to bear the weight of full light in an immediate encounter with nature. The life and creative biography of Roman Brichcín is not yet extensive, moreover, without outward reversals; his destiny is contained and expressed in painting. He was born in 1958 in Pilsen, where he graduated from the Faculty of Education - art education (under the guidance of doc. Milan Hes). He began performing to the public in 1981-84, first in a group of non-professional artists in Č. Budějovice, then as part of exhibitions by students of the Department of Art Education, Faculty of Arts in Pilsen. He has also been able to do solo exhibitions since 1983, first in the university youth clubhouse in Pilsen, then in the Na dvorku gallery and in the Youth Club in České Budějovice; 1988 for the first time in Prague in Junior club Na Chmelnici. From the beginning, Roman Brichcín has been included in the wide stream of new tendencies, the onset of which, since the 1970s and 1980s, has guided the development of architecture and fine arts in the world. At first, it was possible (and in fact partly still happens today) under the slogans of postmodernism - in a vigorous speech against an overly burdensome tradition and against the superstition of morphological immanence in the development of modern art. His sub-programs and methods, procedures and means are now radically abandoned in favor of spontaneous and non-rule-based painting, which relies on an unconventional look, an immediate expression, a direct hand gesture with a brush. The primacy belongs to the Italian trans-avant-garde, as declared by A. Bonito Oliva, and next to it the German Die neuen Wilden soon applied, similar tendencies appeared in France in the Figuration libre and in other European countries; and, of course, soon in the United States, where they were often born in direct relation to the drawings on the walls of the subway and city walls - so-called graffiti (while action painting and pop art still live in the memories). In our country, we were able to meet the onset of similar efforts with individuals of the generation, from which the 12/15 group later separated, and especially in the younger generation, represented, among others, by Tvrdohlaví, mainly the work of Jaroslav Róna. Roman Brichcín has been subscribing to some of the tendencies of postmodernism since the mid-1980s - either consciously or unintentionally. This is not a search for possible connections or influences, a young painter from the region could hardly know the international efforts of the present in more detail at that time. Rather, it is an intuitive understanding of parallel tendencies or a common climate - the marking of identical lands of creative endeavor. Hence the emphasis on the graded openness and spontaneity of the painting, getting rid of any stylistically focused laws. Even in this respect, the painter can rely on the spontaneity of vision, which allows a free field of artistic means - line, color, light - in a completely unconventional formation of surface and spatial relationships. The second characteristic feature of this orientation is the re-prioritization of content, sometimes even to a literary communication. Hence the emphasis on close connections or places directly the integration of semantic considerations and means of expression (in an effort to paint purely personal experiences or generally declared stories).

The handwriting spontaneity and unrulyness, as well as the contrast of the coloristic solution, was applied to Brichcín's paintings as early as 1985–86 (Wounded, Broken Lattice). Elsewhere in an effort to describe personal experiences (Holidays in Prague, From the Pilsen - České Budějovice expressway); while under the banal name lies a psychologically and artistically tense message. The process reserves the ability to speak the immediate language of colors and forms; from 1987–88, this is evidenced by the White Image (based on the relationship between man and woman) or the Blue Signals. Often there are motives of violent gestures, struggles, strife (Between Dogs, Protector, Conflict). Some paintings from 1987–88 develop into complex and mysterious stories (Manipulation, Lovers with Musicians). But a characteristic feature of Brichcín's painting is the inwardness and spirituality of a directly religious nature, based on a deep experience of biblical stories or scenes of Christ's suffering (Hora Olivetská 1990). This inspiration often leads to generalization and updating, as evidenced, for example, by Josef and Putifarka (Temptation), which reflects the acute eros of modern time. Moreover, in the usual relationship of postmodernism to the relics of the past, it is not surprising that we also encounter the Tribute to Dutch Painting (1989) in an attempt to capture the atmosphere, environment and tradition of a large painting country (Vincent van Gogh was Dutch). The work of Roman Brichcín from 1990–91 is undoubtedly a testament to the happy synthesis of the painter's efforts, confirmed by a number of paintings that are sometimes repeated in a cyclical series or are decomposed into a diptych (eg 1990 Magicians, Fisherman, 1991 Cat, Good Messenger), but also probably from the same year a cycle of reflexively founded Philosophers, which in 1992 included the paintings of Moses and Kantor. From a number of important realizations, it is possible to mention especially the Lover (Summer Night) in consonances and dissonances of red, brown, yellow, green, blue. After all, the colorist construction expands into contrasts in all paintings and focuses on distinctive chords. This is confirmed, for example, by the Excalibur from 1992, based on the dominant emerald green, in moderate harmonization with black, blue and pink. The construction of the painting Blue Magician I. from 1990–91 is marked on a completely different, directly opposite color solution, where the blue of the clothes and the sky is in direct to brutal contrast with the sonoric chords of yellow, orange, and red. In 1993, Roman Brichcín painted the diptych Man and Shadow with the subtitle On the Jungian Theme. The paintings are a tribute to the philosopher and psychologist C. G. Jung, who perhaps most penetrated the fact that man discovered his soul - in the structure and function of the unconscious, in learning about archetypes deeply rooted in personal experiences and in the collective unconscious of the world. In this context, the painting Sen also belongs in a disturbing way of painting, in two dark figures and in a limiting area of ​​blue, with a liturgical object of a seven-armed candlestick. The religiosity of broad understanding is also confirmed by works of a monumental nature: in 1992 a monument on the site of the Jewish synagogue in České Budějovice, in 1993 the Stations of the Cross in Kamenice nad Lipou, whose painted stops are inserted into old chapels arranged in the forest. Roman Brichcín's painting seems predatory to aggressive; although it sometimes escalates to dramatic to furious means of expression, it never loses its deliberate degree of balance, although sometimes on the edge of a knife. Some of the paintings, not only in the subject, but also in the concept, go to the tolerable limit of pathos, but Roman Brichcín is cautiously aware of this danger. After all, painting in his imagination is a matter of subjective experience, in a noetic, psychological and ethical sense; the image as an expression of the mental state, as a testimony of the struggle, as a confession of personal suffering; it is not for nothing that the Aristotle concept of catharsis is recalled here. But at the same time, he constantly and above all strives for the conception of the image as a subjective knowledge and an interpretation of reality, as a mythology of things and events in the world. At the same time, according to his own notes, the artist's efforts are focused on "painting to witness Jacob's struggle with the Angel, the clash of man and earth, the foolish desire of man and the wise divine knee to the abyss of knowledge"… as people of the Middle Ages in the temples they were able to create, I believe it makes sense to leave traces of honest endeavor, search, and sometimes finding. ” However, Brichcín's painting is not without relations to the past; the artist's vision has obvious roots in expressionism, not so much in German as in Scandinavian (E. Munch) and also in French Fauvism (G. Rouault, whose personality and work Roman Brichcín worships above others.) is also well aware of the connection with home; he himself recalls Jan Bauch, Josef Jír, Jiří Sozanský, with whom he became friends, in succession of generations. It recognizes the values ​​created in the art culture of southern Bohemia, especially the paintings of Karel Valter, and I think also Václav Rožánek; Jiří Zeman helped me a lot, he reminds me. It is therefore good that the painter, who today transitions from years of youth to years of maturity, gets the opportunity to present himself with an exhibition in Prague.

Modern art, whether its boundary and genesis, is placed anywhere in the 19th century. or XX. century, does not develop in a mechanical process in which the new automatically overcomes the old. On the contrary, the values created are more in line with parallelism and belonging - often in return to the past. The development is therefore based on the principles of ideological and expressive plurality, in pointless alignment, while necessarily in the consciousness of continuity. Certainly every generation has the right to a strong opinion, even a sectarian one. But it is a mistake to assume that new art may be born in forgetting everything that was in the past; who forgets this angular experience of the development of artistic creation in the world - in the times before modernity, in the time of avant-garde modernity, differently as today in the indefinite zone of postmodernism - sooner or later pays for it in the entirety of his work. 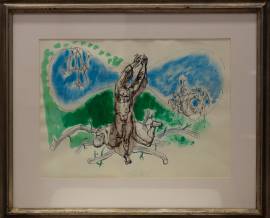