One of the most interesting representatives of the so-called Krakow Landscape School.

In 1898-99 he studied at the private schools of S. Grocholský and A. Ažbý in Munich and in 1899-04 and 1906-07 at the Academy of Fine Arts in Kraków under the guidance of J. Malczewski, T. Axentowicz, L. Wyczółkowski and J. Stanisławski, who had the strongest influence on him.

For the cabaret Zielony Balonik "he was the author of posters and invitations. He served in the legions during the First World War.

From 1917 he lived permanently in Warsaw.

Painted landscapes, nights, architectural views. He was also the author of paintings, drawings and sketches about legionnaires, incl. portraits of soldiers.

He perished during the Warsaw Uprising. 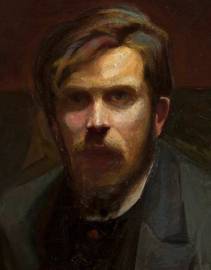