He graduated from the Academy of Fine Arts in Prague, where he went through Veronika Bromová's New Media Studio and Professor Milan Knížák's Intermedia School, where he also graduated in 2005. He was also a member of the art group ZTOHOVEN and one of the members of the legendary Prague art community TRAFAČKA.

In his work, Vlček works with a generally understandable visual culture of historical war symbolism and technology. He is fascinated by the bravery of ordinary people who were able to risk and sacrifice their lives for higher moral values.

Jan Hus followers, planes, skulls and weapons. At first glance, it might seem that we are confronted with images of some militant, Nazi psychopath, but this impression will soon fade away, as there is a joke and fragile tenderness under the guise of the boy's armor.

His paintings lack pathos, rather they speak the language of irony and semantic games. The Hussites saddle brontosaurs, fly in grippenes and, hidden in Trojan horses, fight in the desert near Nineveh.

Wolf's art is essentially a humanistic message, a desperate cry into this cynical world, entirely in the spirit of the name of one of the exhibited paintings: PEACE IS SUPER / I LOVE BOMBS. 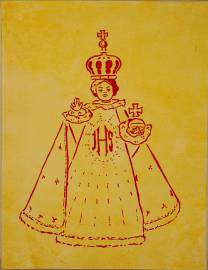 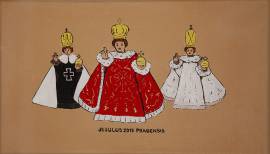