A Painter from the Bohumil Hrabal friends circle

George Pařík from his youth dedicated to drawing, and asked about the sculpture. As a cartoonist and illustrator worked with editors Literary newspapers, cultural creation, Young World, magazines Flame, art work etc. His artwork is characterized by thick contour lines, changing and basic type man with a distinctive nose, later also focused on other topics: women, cowboys, dogs, horses and birds.


Drawings stylises a certain predetermined intention of covering with the inner content.

"Originals of drawings George Pařík, an artist from the circle of friends of Bohumil Hrabal. They made a combined technique (Tuž + watercolor) on Thursdays, signed, A4, A3 and others. The price range from 250 to 600 CZK. The two are glazed and zapaspartované - and 900 CZK.

Master's perceptive eye could not miss. Figurine that almost half mine covered with black painting boards, passed cracked walls and dim corner of old Liben or lay empty Thursdays dingy pub and café tables not only Liben, but, very often also the Old Town and Mala Strana and connecting the world of fanciful ideas with the atmosphere of old Prague, incarnated his scarred soul into graphite and watercolors, since this was the life of my father. And so their actions as well as their minds, entirely according to the laws of Performing, from time to time by bringing in a strange chord pábitelském to issue an imprint of two gentle, timid hearts for pleasure and edification of others.

Delivering the kind reader to record one of those meetings - Bohumil Hrabal and Jiří Pařík.

In the theater, a sports club Neumann Liben have an exhibition mating. Father and son. And Mrs. Paříková them stitched into the canvas pábitelský poster, so who knows Parika, according to the poster would have thought that those two are some acrobats, sword swallowers, throwing a lasso or a knife, or a successor chip, the magical tightrope walkers of my childhood. I think that anyone who comes to the show or knows Parika of exhibitions, which show off the audience at shows past, will be enchanted by this exhibition, just as I do so many years ago splinter groups, tightrope walkers, who do bulrushes my eyes, dropping into the network one coat after another, twenty coats and jackets, to stay on the high-wire in his shirt sleeves.

George Pařík son, my drawings dragged through the prism of children's eye to the classicality itself. Breaking away from the children's illustrations and techniques drawn wistfully humorous contents of the gallery remnants of old culture Liben. His poetics are approaching the mystery of Paul Klee not unlike hundreds of child handset on the outskirts of Prague, which a maniacal seriousness počárají barracks, as far reaches of chalk, and if the wall is not enough, continue drawing shots, animals and cartoon games into asphalt streets without perceive it is already dark, it can sniff and lick psíčci that car horns at them shouting: knead, haranti, out of the way, or Let's go! Anthony Pařík case, the father is simpler. In sixty years on him doctor found that a broken heart, therefore, whether the Defence will invent something, what would be fun. And Mr. Pařík began to sculpt shots for grandchildren, but after the first cutting felt that they actually first meet cut himself to himself that this formation is that, after what for so many years unknowingly longed that until now he will be so fully realized that her child love for the gray hunters, the last robber Czech forests. Babinskému that Mr. Pařík elder inspired so much that not only is the content of his work, but the Czech forest and everything in Czech woods can find a pick, it all serves to Mr. Parika to forest and forest consisted not only his wooden sculptures, but also pictures. And yet Mr. Anthony Pařík certainly knows nothing about and collages of pop art. And yet his work achieves exactly what I saw at last year's Frankfurt show: 600 years of collages. And why? As Mr. Pařík still carried away Babinským, the last romantic highwayman modeled on Schiller's Karl Moore.
So Paříkova, father and son. A palaver that unites them. A trio, but could it say about the triplets. And if so, only in the right trojčení, which is the mother of inventions. Mr. Anthony Pařík, robust, rosy-cheeked and full of genial smile, as if Jules Maigret just came from Pinkasů where you put the ham with horseradish and three Pilsener beer therefore anything but Babinsky. Mr. George Pařík, bearded how Babinsky in prison, as though life was in his backpack, just not very easy life, but the lives of several of his neighbors that he loves. Paříkova, father and son.

P.S.
That is then either not surprising that when I visited George Pařík in his studio, which is currently residing at the door was missing a handle that when I was admitted, the handle was tucked away on the other side of the door when we left, the handle Plug and unplug complicated manner outside the door, then taken with him. You can not then not at all surprised that when I started writing about the exhibition Paříkových I got a letter in which good woman sent me an old newspaper clippings about Babinski and put his likeness, and I'm from the newspaper reproached other strange encounters that Babinsky, when he spent twenty years doing gardener Řepích that every Sunday called at Spur street in Dittrich's pharmacy, and when he drank a glass of bitter liqueur, rose today Neruda street, and certainly the Babinský musíval walk around the house in which George Pařík co-founded the gallery at zlámaného round, where George has exhibited and sat on the step of the gallery, at its entrance during the day shone lighted kerosene lamp without George Pařík knew tudyma kráčíval gray hunter, the last bandit Czech forests, which for years Posed and inspires his father in Bakov, where the square in the barbershop every year installed its exhibition in honor of Babinski. And so the newspaper article and photograph sent to Mr. Anthony Parika to Nova Ves u Bakova to circle not only closed, but as to the handle Pařík younger, even the random letter became a key to understanding certain correspondences, in whose waters sail Palaverers.
Bohumil Hrabal 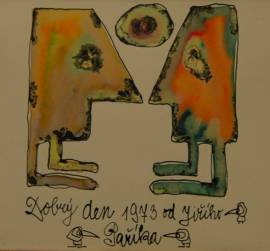 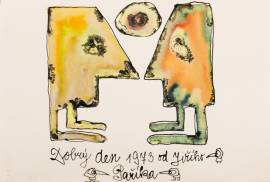 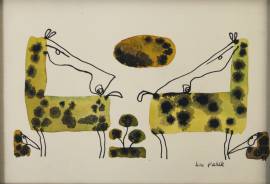