He was one of the prominent personalities of Czech art of the 20th century. His paintings, graphics and illustrations captured not only his attention but also the hearts of many people. The same applies to his narrative art, which by his humor and mankind has always been able to bring salvation of laughter and good mood.
Painting on Wood - 1999 (co-author Václav Plechaty)

The beloved region of Vladimír Komárka was Semilsko, where he was born and where he spent most of his life. He has been attracted to fine arts since early youth - he began his studies at the Art Glass School in Železný Brod and in 1946 he was admitted to the Academy of Fine Arts. After two years he moved to UMPRUM (Academy of Arts and Crafts), where he graduated in 1954 with prof. Karel Stipl.

Already during his studies, he intensively devoted himself to his own free creation and actively participated in groups and associations of like-minded creators. For example, in 1965-71, he was a member of an important association of Czech artists and graphic artists Hollar.

His exhibition activity was also very rich - he organized his first independent exhibition in 1958 in Česká Lípa. His handwriting was as well made for the production of illustrations. For the artistic accompaniment of Vladimir Holan's verses, the Tree of Bark Crash has won the prestigious award of The Most Beautiful Book of the Year in 1981. However, his poetry collection of Jaroslav Seifert poetry collection from Piccadilly (1979), the ballads of Karel Hynek Mácha "Máj" (1982) and others also met.
The New Law (etching)

Vladimír Komárek revived the famous Czech imagination, such as Jan Zrzavý, whose painting was revived by Vladimír Komárek. While his early works are characterized by considerable expressiveness, for his paintings from his mature and crucial period, characteristic lyricism is solemn and captivating poetics. The mosaic expression was mainly gentle colors and blurry contours, which brings a unique atmosphere to his paintings.

His graphic design is also reversible. Especially in the field of small graphics and ex libris belonged to the Czech and European top.

On the CD Just a short visit is pleased with three records from the talks with Vladimír Komárek.
(by Wikipedia) 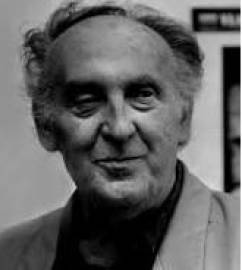 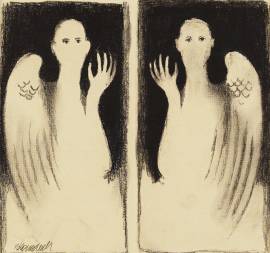